Win Some, Lose Some

We got another great rain- 3/10" across the east side of the ranch.  The west is still dry, but the eastern 3/4 has now received nearly 3" of rain in the past few weeks.  That's still way behind, but believe me, we'll take it.  I went out to check on stuff and found this:


Water in the creek!!  This really takes a load off the windmills and also helps the cattle spread out and graze different areas.  I have to cross the creek in the 2nd photo, but fortunately, there's a patch of high ground there.  ASAP, hopefully today, I need to bring our skid steer down here and make some road blocks to keep antelope and prairie dog hunters from driving straight down a hill to the right of this photo.  A straight road will just erode like crazy; the correct way down is to zig-zag.  Unfortunately, visitors to the ranch aren't always astute in matters of erosion.  So, I"m gonna block the road.


I drove around the back side of Chavez Mountain and put some salt out back there.  Salt will draw the cattle to that spot and there's some strong grass on the backside of the mountain.  While back there, I took this panoramic photo with my phone camera.  Didn't realize this until I got home, but panoramic view uses a much smaller photo size.  Too bad, 'cause this would look really neat if it filled your screen.

A little further on, I liked this cloud formation but was still on panoramic setting.  Oh well, here it is anyway: 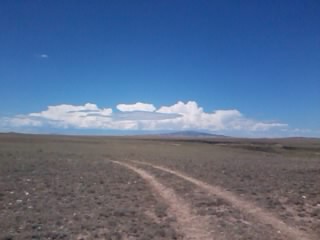 The rain is the "win some".  As for the "lose some" see the little box in the upper right hand corner of this blog.  I've been on a diet since April 25.  Back then, I weighed 177 lbs and even though I felt okay, I looked fat and my dear wife said I was fat.  About that time, I also got a new phone- a Samsung Android- and started looking at apps for it.  One of this was the "MyFitnessPal" app which is neat little online calorie counter.  According to the BMI, I should weigh 140 lb.  Now, I think that's a little low because I'm kind of a stocky guy, but I set 155 lb as a reasonable goal- still a 20 lb weight loss.  For the past 3 months, I've been entering calories and keeping at my recommended calorie count.  At first, I over-estimated my activity level (and we were hiking a bit more then) and gave myself 1800 calories/day.  After awhile, though, I decided I really wasn't that active, recalculated, and now I get 1600/day.   If it's an active day, I can have 1800, but I basically try to keep my calories between 1600-1800.  If I exercise, I get more and MyFitnessPal tells what's what.  Today, I stepped on the scale and was greeted with a "159".  This is the first time in 10-15 years that I've been in the 150's.  Yee-haw!!!

You know, it really wasn't that hard.  Keeping track of the calories was the key.  I have found that the difference between making the goal and going over is a single glass of juice at breakfast, an ice cream bar, a cookie, a biscuit, 2 tortillas instead of 1 for lunch, and so forth.  It really helps me to just eat consistently.  For breakfast, I have one of two choices- a Clif Bar or ham/eggs/potatoes.  The former is an excellent breakfast, easy to eat, and surprisingly satisfying.  The latter has a few more calories but is good for variety.  Both of these will hold me to lunch.  I can't say the same about other breakfasts, so I just stick with one of these two.  At lunch, I get a serving of this, a serving of that, a salad, and that's it.  I choose my foods a lot more carefully now.  I usually eat 600 calories for lunch which means I have 500 or so left for supper,  If I exercise, I can have more and once every couple of weeks I splurge at Pizza Hut buffet or eat Sunday lunch at the restaurant.   But even then, I don't "pig out" and the next day, I'm back on the program.  Again, it really hasn't been that hard sticking to this plan and there are days where I actually have to eat a little more!  Mostly, after entering my day in MFP, I find that I need some more carbs.   Protein and fat has not been a problem, but I've found that I'm sometimes low on carbs and I've also found that if I don't eat those carbs then the next day, I'll be run down.  That's where the Clif bar is especially handy because it has such a good balance of carbs, protein, and fat.

And so here I am- in the 150's!  Granted, I'm on the deep end and not the shallow end, but the shallow end is in sight.  I think I'll shoot for an honest 150 lbs and then up my caloric intake to 2000/day to see if I hold.  The bad news is that none of my 32W jeans fit any more, and I just bought 5 pair back in early April!!  Maybe our local seamstress can take 'em in?

Finally, I've been working on the hawk house, getting metal panels up and such.  It's still not real pretty, but it's getting there:

And remember that ball of fluffy white down that I told you was a peregrine falcon?  Here's the handsome little fellow today:

Serious training is going to be starting for him in the next 2 weeks.
Posted by Bryan Kimsey at 6:51 AM