Well, this is the longest I've gone in updating my blog.  It's not that nothing has been happening- to contrary, a lot of things have been happening, but it's just been the same thing over and over and over and over, in a seemingly never-ending repeat.  You ever see "Groundhog Day" with Bill Murray?  Something like that.   It seems like I've been building stuff all summer long.  And it seems that way because that's exactly what I've been doing!  First the hawk house, then the shop, then working on the buildings that got emptied when I moved into the shop, then re-arranging the house where stuff got moved out, and on and on and on and on.  In the middle of all this, there's a ranch to run, antelope hunters to take care of, taxes to pay, deaths, births, weddings, anniversaries, birthdays, and on and on and on and on.  Whew, I'm already tired.  But wait!  There's more! I've been flying both falcons, too.  Teal season opened this week and we've trying to catch one.  So far, no luck, but the falcons are flying better, sticking around, coming to the lure, and just getting better and better trained.

Enough chit-chat, let's get to the pictures...

The hawk house is nearly finished.  All the metal is up, the exposed wood is painted to match the roof, and all that's really left to do is put flashing on the corners.  But I'm tired of spending money, so that'll just have to wait until next year.  For now, the building is solid and comfortable.  There's the prairie falcon sitting up against the window to the left.


Inside the shop, I am pretty well full.  I have tables, benches, saws, box racks, and falcon perches.  The shop makes a pretty place to park the prairie before going flying.  Outside, I'm in the process of putting in Z-flashing to protect the top of the skirting, and digging the skirting about 2" into the (hard) ground to help keep rodents out.  It's slow work, but I should be finished with it tomorrow.  I'm backing the north skirting with some insulation and this should help a lot this winter.

Guitar work has been coming along well.  I find that it's nice having all my stuff in one room, but since I have 3 benches, I tend to get tools scattered around the place and I walk around a lot more to get this or that tool.


In the process of doing guitars, I've also recorded a few videos for the customers.  Here's the top guitar in action:

And here's the other one:

And finally, on the Davidic Front, mom and David are off to ABQ this afternoon.  David's hemoglobin was 5.1 gm/dl today, almost what it was back in May when we started looking for a solution to his anemia.  I don't know what we'll find when they get to the doctor's tomorrow, but if you want to keep up, follow me on Facebook.  Speaking of Facebook after years and years of resisting, I've signed up.  Probably part of the reason I haven't updated my blog is 'cause I've been busy kicking around FB to see what it'll do. 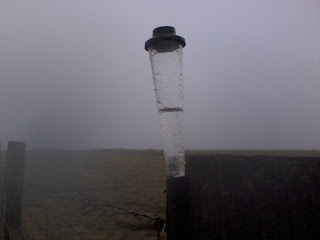 Last week we got 2" on the west side of the ranch and 3" on the rest.  It will let the grass grow just a bit longer, but it also filled up the creeks and ponds so that the cattle can spread out a lot more and get to grass they haven't grazed all summer.  It also means that I'll have some ducks to fly with the falcons!

I think that's enough for now!  Upcoming this week, I need to ride the pastures and get a complete count of cattle on the grounds in preparation for shipping sometime next month.
Posted by Bryan Kimsey at 8:16 PM No comments:

Past Lives, Half Lives

I've been working out of my new shop for a full week now.  It's pretty nice and I'm happy with the move.  I have everything out there in one place- power tools, shipping stuff, workbenches- and it's nice to leave the house and "go to work".  It's a lot quieter in the shop and I can listen to music w/out having to hear it over the washing machine, people talking, people walking, doors slamming, phones ringing, and so forth.  It's a more comfortable work environment.

After moving my shop out of the house, I moved my office from the bedroom corner to the central room and I like that better.  When I'm doing office work, I don't mind household noises so much and I actually like being in the flow of traffic as I can keep up with what's going on.

I told you all that to tell you this- in the process of moving my office, I went thru my file folders, as part of the purpose of moving the office was to give me better access to my file cabinet.  In the process of going thru my folders, I found a folder where I'd block outlined my "career".  I must've done this pretty immediately after moving to the ranch and I just found it interesting to look back over my earlier jobs and life.


We were in Anahuac TX when I was a "househusband" and it seems like we were there forever, but it really was only 8 months.  After that, I went into a cycle of working for the NM Legislature (as a bill analyst) and working for BLM in the summer (doing raptor surveys and other field work).   Then I went to grad school at Eastern NM University and did spotted owl work for the USFWS/NMSU during the summer.  I worked for a month at the ranch one summer, before the second owl job came up.  There's the finish of grad school, a summer with The Peregrine Fund (which was probably my first "real" wildlife job and definitely the first non-government job), and then back to the Legislature.   I was surprised that there was so much time between the legislation jobs and I sure didn't remember doing them after I was done with my M.S.  I had a period where I was "self-employed" which means that I lived on savings, Top Ramen noodles, and worked on the falconry equipment book.

The book was published in '92 and then I headed up to Boise ID to start work with "Greenfalk Consultants", doing radio telemetry studies in the Snake River Birds of Prey Area.  After we got to Boise, paid 2 months rent on a house, and everything else, we had $120 left to our name!  Greenfalk was pretty much a dream job for me as it required me to do field work, computer stuff, and data analysis.  Again, it seems like I did this for a long time, but it really was only 2.5 years, only 2 of which were as a full-time employee.  During that time, I gave several presentations at scientific meetings, we bought a house, and we had our daughter (who is now 17 and has her own blog!).  A busy and exciting time!  A few photos from then:

When this project finished, the company more or less dissolved and we all went job-seeking.  I decided to move into the computer field and make a bunch of money.  Ha!  Big surprise there.  I ended up working at tech support for a records keeping company.  I swear, I was there for years and years, but it was 6 months.  During that time, I developed tendinitis and couldn't play guitar for most of those months.  About that time, I decided to move back to New Mexico, so I called my grandmother up to see if she could use a ranch hand on the north ranch.  She said "I've been waiting for you to call".  However, there wasn't a house or anything and all that had to be laid in place which was going to take some time.  I heard thru the grapevine that the folks at the Snake River needed a desktop publisher for a 6 month position.  I'd be back working with the biology crew, doing computer work- right up my alley- plus I knew the study and could help with fact checking and all that.  I applied, got the job, and turned in my notice to the database company.  I quit there on Friday and started the new job on Monday.  The desktop publishing job was a real pleasure and I got to work with some of my heroes in the raptor field.  It was a great ending to that career.

When the house was on the ground, we moved the family down via U-Haul and then I flew back to Idaho to finish up my last month at the desktop publishing job.  During that last month, my former employers at Greenfalk let me live in the old office (bathroom and shower there) and even gave me use of a Toyota pickup to drive.  Bill and Joan- THANKS!!!  I finished up the job, flew back to NM (with a newly acquired Cole F5 mandolin!) and started a new life.

Looking back, what strikes me is this- up to finding that folder, I've thought of myself as a former wildlife biologist now working on the ranch.  But the reality of it is that I only worked as a full-time biologist for 2.5 years.  The rest of those were summer and temporary jobs- 6 summers and 6-month positions worth of those.  By contrast, I've been at the ranch for 15 years, working professionally on guitars for 12 years, and pastoring my church for 6 years.  I have more formal training in biology, it's true, but far more real-life experience in the other 3 jobs.  Maybe it's time to re-calibrate my life and start wearing the hat?

Enough about me.  David and I went back to ABQ last week for his 5th transfusion.  They always test his blood prior to the actual transfusion and this time discovered that he'd developed antibodies.  This complicated the transfusion as a match had to be found for the antibodies.  Our appointment was at 10 am and the actual transfusion didn't start until 3:30 pm.  Fortunately, we'd already made plans to stay in Santa Fe for the night so that we could attend both the NM Falconer's meeting and the Santa Fe BG festival on Saturday.  The transfusion went without hitch once it got started and we made it to SF for a good night's sleep at my mother's very convenient casita.

Next day, we went to the falconer's meeting and that was extremely productive for me.  David won a new hawking vest for me in the raffle, and I came home with some badly needed falcon training supplies.  We got to visit with new friends and friends I've known for 30 years but haven't seen in a long time.  I got to see the other peregrine falcon taken this year in NM and just had a great time.  I need to get out more.

Well, that's all I know for this week.  Time to get to work.
Posted by Bryan Kimsey at 10:22 AM No comments: