It's been awhile since I updated my poor little blog.  And that's 'cause I've been pretty busy.  Let's catch up.... In Feb, I mostly worked on guitars and rode dirt bikes a bit.  The weather was decent and we got a fair amount of riding done. Then in early March, our friend Heather stopped by for a visit. Being that she has quite a bit of ranch and livestock experience, I put her to work and her visit turned into a 6-week stay.

First course of action was building fence. I have 2 miles of fence between two pastures that was in pretty bad shape and has been since I got to the ranch nearly 20 years ago (I need to let that sink in for a minute... nearly TWENTY years ago...). I wanted it fixed up.  To that end, I bought a Danuser T3 post driver for my Case skid steer. We worked about 2-3 days/week on the fence and got it all spiffied up with steel posts, re-stretched wire, and some new braces. After some initial hiccups, the Danuser worked beautifully. At one spot, I pounded posts by hand into a dry lake bed.  Later, I drove by with the skid steer and decided to see how much further I could get the very tall posts.  I drove them an additional 2' without even actuating the "pound" part of the driver!  That's when I got impressed.


Since Heather has experience with livestock auctions and Derek had some money in the bank to invest, we went to town a couple of times to buy cattle for him. I met with a local rancher the first time and got both his and Heather's opinions on the cattle.  When a likely bunch came up, we bid and won and suddenly Derek was a cattleman!  Back home, we branded, vaccinated, and sprayed with insecticide, all firsts for us.  We ended up buying 6 yearling steers in all. We'll let these gain weight on grass all summer and sell them in the fall, making a (hopeful) profit on the gain. This is a test run to see if we want to buy 20-50-100 yearlings in upcoming years.


In addition to the yearlings, Derek has a herd of 8 momma cows and they started calving this past month. With these, we'll likely keep the heifer calves to build the herd and sell the steers this fall to generate money with which we'll buy more cattle next spring. If all goes well, by the time Derek's ready for college, he'll have a good fund built up.


Another thing we did was go hawking.  Since I met Heather thru falconry and since she brought 3 Harris' hawks with her, flying them seemed the logical thing to do. We flew them mostly in my Cedar Creek canyon which is a pinyon/juniper lined canyon. Bunnies aren't plentiful, but we got 2-4 decent flights every time and caught 1 bunny and a jackrabbit. We also saw a Barbary sheep ewe with a very small lamb in the canyon, a first for everyone. And we got a lot of much needed exercise! I think we fired up to fly Harris's again and I've put an order in for 2 birds for myself for this fall.  So, hopefully, we'll have some news on that later this summer.


And then we went fishing.  Being originally from Minnesota, H has some fishing tricks up her sleeve including The Art of Filleting, something which we'd never done. We fished pretty much once a week and caught lots of trout.  Derek caught his first walleye, smallmouth, and largemouth bass all in one day at Ute Lake.

I left out a bunch of other fun things- "walking" up to the top of the local mountain (pretty sure I said "climb" but everyone thought they heard "walk"...), looking for prairie falcons, playing Scrabble, visiting Las Vegas NM, feeding cattle, sitting in front of the fire talking, listening to music, and more, but I think you get the idea. We all learned a lot of things from each other, had fun, and it was, in short, A Most Excellent Visit.


Alas, all good things must come to end and, in no time at all, it was time for Heather to head home to Montana. After lunch one day we said our "see you in awhile"'s (no "goodbyes", nope!), sent her down the road, and started getting back into our normal routine. That, of course, was quickly punctuated by incoming cattle (going into the pasture which fence we'd just fixed) and just like that, another ranching season begins.

And that brings us up to speed. Every year is an adventure.  What will this one bring?

There is one more thing. We observed what would have been David's 15th birthday with a visit to his grave. Tears were shed, funny stories were told, and- as always- we try to look forward in hope. 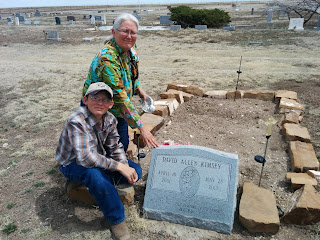 Posted by Bryan Kimsey at 9:43 PM No comments: